We recently had a family holiday, the first in a while, to Christchurch. Daddy had a course on the Monday and Tuesday and so we all flew down for a long weekend on the preceding Friday. Over the weekend, we explored the many features of the Margaret Mahy park, ate icecream in the autumnal sun, fed some hungry and bold eels at Willowbank, visited family and delighted in a visit to Brighton beach where you and I clung to each other as the tide rushed and gushed out, leaving us with that giddy but delicious feeling of gliding on water.

But on the Sunday night, I found myself dreading Daddy’s upcoming time on the course and its natural implications – I would need to navigate an unfamiliar city on my own. Of course, none of this was really about driving in a new city. My confidence, and particularly my confidence in parenting, had been diminished of late and a minor stressor (driving in a new city) was feeling all too difficult. As I was scrolling faccebook that night, I came across a post from Aunty Talitha – featuring a new poem she had written.

Holly, I’m wondering about your grown up self now as you read this letter. Have you ever read something that speaks profoundly to where you find yourself? This is what happened to me that Sunday night. Within a moment of reading that poem, it interrupted a pattern of thinking, feeling and behaving that had become invisible to me. Here is the poem and the story of why it was so meaningful.

It is a powerful and simple image isn’t it? If we have shadows, we have light. If shadows are present, so too is the light. That night and the weeks and months preceding it, I had been grappling with the unknown on a particular issue and yes – the unknown cast a formidable shadow. But by focussing on the shadows, I’d forgotten to return my attention to the light and the knowledge that we are forever in the light.

Why was the image so striking to me? Just that afternoon at the beach, I’d taken two photos of you at Brighton beach. You were in almost the same spot in both pictures, but each photo was angled towards a different end of the beach. In one photo, the sky was blue; the water sparkled as you danced through it. In the other, the sky was much moodier, gray and cloudy. And yet you were lit. And our shadows were sharp. I had been struck by the two different images when I had taken them and they immediately came to mind when I read Aunty Talitha’s poem.

Being in the light may mean many things to many people – but for me, Holly, it means that we are never alone. No burden or difficulty is ever carried alone. We are part of a stream of life: ‘You are not Atlas carrying the world on your shoulder. It is good to remember that the planet is carrying you.’ (Vandana Shiva). For me, being in the light is also about a divine presence that never leaves us. This is so beautifully captured in psalm 139 (v7-12) – and I’m struck by how the theme of light and dark features here too:
Is there any place I can go to avoid your Spirit?
to be out of your sight?
If I climb to the sky, you’re there!
If I go underground, you’re there!
If I flew on morning’s wings
to the far western horizon,
You’d find me in a minute—
you’re already there waiting!
Then I said to myself, “Oh, he even sees me in the dark!
At night I’m immersed in the light!”
It’s a fact: darkness isn’t dark to you;
night and day, darkness and light, they’re all the same to you.

Holly, this letter is for you whenever you might feel like you are facing something insurmountable. There will be times in your life when you come up against challenges that seem to be beyond your wisdom, resources and strength. I have found myself in this place many times. But do you know what? Nothing has undone me like being a mother. Motherhood has unravelled parts of me that felt so comfortably spun – entrenched responses, familiar ways of thinking and unexamined beliefs held true for all too long.

It has been and continues to be a steep learning curve, weathering all that parenthood brings. But I am always in the light.

My prayer for you is that your heart will be flooded with the knowledge that you are always in the light. 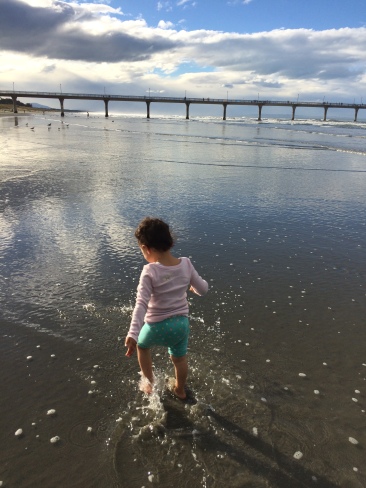 1 thought on “You are in the light”